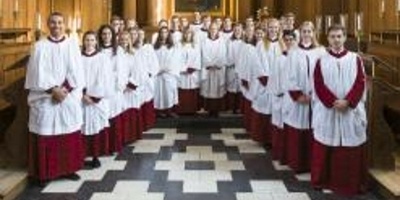 I am delighted to be able to welcome back the choir of Clare College Cambridge. Clare were last with us in December 2014 and it is a real pleasure to have them back again.

Since the founding of a mixed voice choir in 1972, Clare has gained an international reputation as one of the world’s leading university choirs. In addition to its primary function of leading services three times a week in the College chapel, the Choir keeps an active schedule recording, broadcasting, and performing. Under the direction of Graham Ross, Director of Music since 2010, it has been praised for its consistently ‘thrilling’ and ‘outstanding’ performances worldwide.

The Choir has toured widely, including in the United States of America, Hong Kong, Singapore, Malaysia, Australia, Japan, China, Russia, the Middle East and mainland Europe. The 2017/18 season includes many performances throughout the UK, concerts with the Orchestra of the Age of Enlightenment and Manchester Camerata and major tours across USA, Rome, France and Malta.

In addition to live performances, the Choir has produced an impressive discography of more than forty recordings. Their recordings under Graham Ross on the Harmonia Mundi label have been released to great critical acclaim, earning praise for ‘impeccable ensemble’ and ‘immaculate performances’.

The concert will include a selection of favourite Christmas carols and songs and the church will be lit be candles. Due to the performing commitments of Clare, this concert is slightly later than usual this year. Being closer to Christmas, it will be even more festive.

In previous years tickets for this event have sold out, and due to the popularity of Clare, I expect this will be the case in 2018. Tickets will be limited to 200, and can be bought in advance in order to avoid disappointment. Doors will open slightly earlier than usual at 6.30pm.