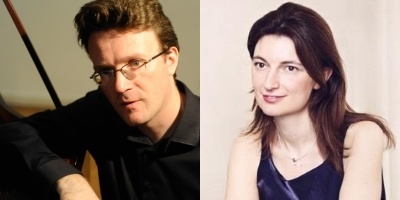 Neapolitan pianist Emma Abbate enjoys a demanding career as a piano accompanist and chamber musician, and has worked with some of the finest singers and instrumentalists of her generation. Emma has performed at Wigmore Hall, Southbank Centre, Royal Opera House, St John’s Smith Square and at the Aldeburgh Festival. Internationally, she has played at Salzburg, Lisbon, Naples, Ischia, Koscierzyna and Sorrento, amongst others.

Emma might appear familiar to some of the LMF audience, and this is because she has performed and recorded at Finchcocks. Along with Julian Perkins, Emma created the last ever disc to be recorded at Finchcocks, an album of Mozart’s complete piano duets. In addition to this, Emma has recorded a further 6 CDs with a variety of artists.

Emma graduated from the S. Pietro a Majella Conservatoire in Naples and an took an Advanced Diploma at the S. Cecilia Conservatoire in Rome. She then moved to London and completed her studies at the Royal Academy of Music. Emma is a professor at the Guildhall School of Music & Drama and a coach for the Jette Parker Young Artists Programme at the Royal Opera House, Covent Garden.

Julian Perkins enjoys a demanding career as a conductor and keyboard player, and is the artistic director of the Cambridge Handel Opera, and founder director of ‘Sounds Baroque’. He has appeared at venues such as London’s Wigmore Hall, New York’s Lincoln Centre and Sydney Opera House, the BBC Proms and Edinburgh International Festival. Julian has played solo harpsichord at The Royal Opera House, Covent Garden, Welsh National Opera and Northern Ireland Opera.

Julian has recorded a number of CDs including works by Mozart, Bach, Purcell and Handel. His most recent disc is a fascinating album of music for the clavichord by Herbert Howells.

Emma and Julian have played together at a variety of venues around the UK, including the now closed Finchcocks Museum. Their programmes are always well crafted, and bring a mixture of music that showcases the piano duet genre. Their concerts are always well received and highly acclaimed. Tonight’s programme will include music by Mozart, Schumann and Von Weber.