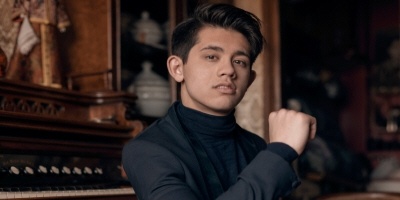 We are extremely happy to be able to present the phenomenally talented 19 year old British pianist George Harliono. George is without a doubt one of the most gifted pianists of his generation, and is recognised as such throughout the classical world. At the age of 16, his extraordianry talent was noted by Valery Gergiev, one of the world’s foremost conductors, who invited George to perform Rachmaninov’s second piano concert with him in Vladivostock. Other leading musicians have also recognised George’s promise, and Vladimir Ashkenazy was so impressed the he refused any payment for tution when George studied with him in Switzerland.

George made his first one hour long, solo recital at the age of nine and at the age of 12 was invited to record Beethoven’s Piano Sonata Op.2 No.1 at the Southbank Centre.

Since then he has performed in numerous locations both in the UK, USA, Europe and Asia, appearing at venues such as Wigmore Hall, The Berlin Philharmonie Kammermusiksaal, The Royal Albert Hall, the Chicago Symphony Centre and the Moscow Conservatory.

George began studying at The Royal College of Music for a BMUS Degree on a full four year scholarship in September 2017. He is one of the youngest students ever to be accepted onto this course.

The programme for this concert is still to be confirmed.