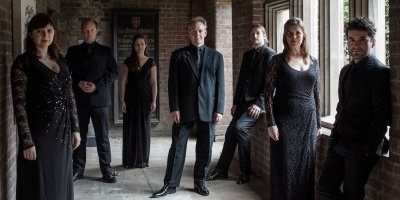 Tenebrae Consort is an ensemble of singers handpicked from the award-winning choir Tenebrae, focusing on repertoire originally conceived for consort performance. An exceptional group of musicians, Tenebrae Consort highlights the vocal quality of the individuals who make up the trademark ‘Tenebrae’ sound whilst creating an intimate concert experience. Known for their combination of instinctive ensemble skills and masterful solo abilities, the singers also perform alongside chamber groups of leading instrumentalists and have collaborated with the Chilingirian Quartet and viol consort Phantasm.

Described as “phenomenal” (The Times) and “devastatingly beautiful” (Gramophone Magazine), award-winning choir Tenebrae is one of the world’s finest vocal ensembles. In 2016 Tenebrae received its second BBC Music Magazine Award for a recording of Brahms and Bruckner Motets, the profits from the sale of which benefit Macmillan Cancer Support. The 2017-18 season sees the return of Tenebrae’s popular Holy Week Festival at St John’s Smith Square, London, as well as concerts throughout the UK, Europe, USA and the choir’s debut in Australia.

‘Passion and Precision’ are Tenebrae’s core values. Through its continued dedication to performance of the highest quality, Tenebrae’s vision is to deliver dramatic programming, flawless performances and unforgettable experiences, allowing audiences around the world to be moved by the power and intimacy of the human voice.

Because of quality and fame of Tenebrae, tickets for this event are priced a little higher than usual, but it is anticipated that they will sell out quickly and that people will attend from further afield.