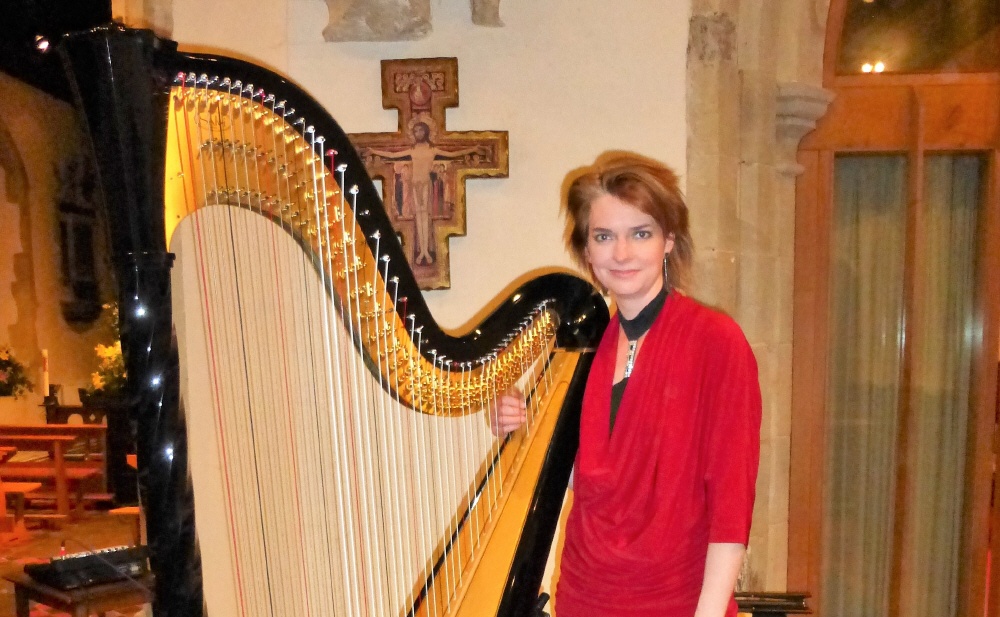 I’m in my second year of running the Lamberhurst Music Festival, and this is definitely one of the best concerts I’ve staged. The music, the performance and the performer were all excellent. Catrin’s programme was exceptional and many people approached me at the interval and commented on this. I think that they were surprised because the harp is not really considered a soloist instrument, but is sometimes considered a little bland. In Catrin’s hands it was anything but bland.

Catrin’s harp is a truly beautiful musical instrument that many of the audience were admiring before the concert started. From the opening notes of Bach’s Partita I knew that the concert was going to be something special. The volume of harp was quite surprising and music really did fill the air. Catrin went from the Bach to a superb arrangement of Debussy’s “Le fille aux cheveux de lin” and then to a technically difficult Sonata written by the 20th century composer Paul Hindemith. Catrin chatted to the audience inbetween pieces and explained that her 4th piece was written to describe that moment when you’ve just gone to bed, and you hear the whine of a mosquito. The ensuing chaos as you chase the thing around the room was perfectly depicted by “Mosquito Massacre” which was played with skill and humour by Catrin – the audience were smiling and laughing throughout.

The second half was equally diverse as the first and Catrin played her electric Welsh harp. I think I can safely say that nobody in the audience could ever consider a harp bland, as it was exceptional. As each piece ended, I found myself thinking that the next could not be better, but somehow it was. The electric harp was replaced by the concert harp and a Tango. A Tango? Whoever heard of a Tango being played on a harp? But it worked perfectly and I could have believed, had I not known otherwise, that Piazolla’s “Libertango” had been written for the harp. The programme finished with Godefroid’s “Carnaval de Venice” which had a real Italian feel to it. For Catrin’s encore she returned to the electric harp, and played a composition of her own from her “Tides” CD called “Clear Sky” which is one of the most stunningly beautiful pieces of music I think I’ve ever heard.

All in all, an amazing evening’s entertainment – fantastic music skilfully played by a wonderful performer who really engaged the audience, many of whom asked me if we might be able to see Catrin again in the future. All I can say is…….. watch this space!