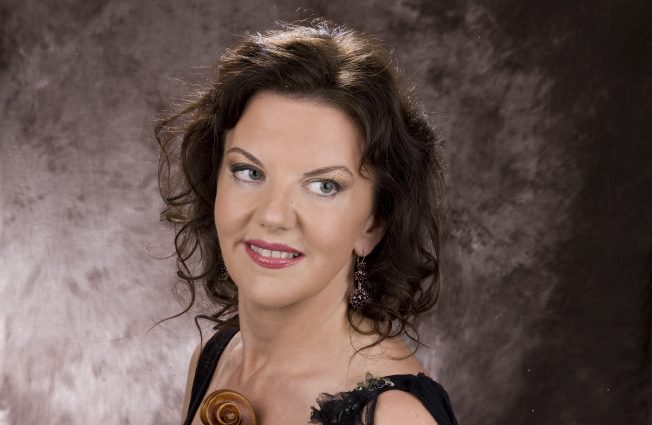 The concert began with a very short Allegro by Telemann which although seemed to be over almost before it had begun, was a wonderful start to the concert as it teased the audience. Tasmin’s virtuosity could clearly be seen in this short piece, and the sound and tone of her violin in St Mary’s was superb.

After the Telemann, Tasmin began her first of many chats with the audience, introducing the next piece – Hora Bessarabia by Roxanna Panufnik – and engaging in a very informative audience question and answer session. Tasmin gave a demonstration of ‘harmonics’ on the violin, which are used in the Hora Bessarabia. Tasmin explained that the Bessarabia was written in 2016 as a piece to be played by competitors in that year’s Yehudi Menuin competition. Tasmin was a judge at the competition and had to hear it 21 times, which surprisingly made her want to learn it as soon as possible. The piece involved a certain amount stamping of feet to give rhythm and so Tasmin moved off of the carpeted stage into the body of the church to play this work. I can’t think of any other concert I have been to where the audience were that close to the artist as they performed.

The first half concluded with an absolutely sublime rendition of Bach’s famous Chaconne from the Partita no 2.

During the second half, Tasmin again had many question and answer sessions with the audience. We discovered that her violin was made in 1757 by Giovanni Battista Guadanini and has been maintained for many years by Peter Beare of Beare Violins, and that Peter was in the audience.

Tasmin played a couple of movements from Bach’s Partita no 3, which she had played the Rondeau from earlier at St Mary’s Primary school.

Tasmin played a fantastic arrangement of the well-known guitar piece Leyenda by Isaac Ablbeniz, and finished the concert with the Ballade by Eugene Ysaye.