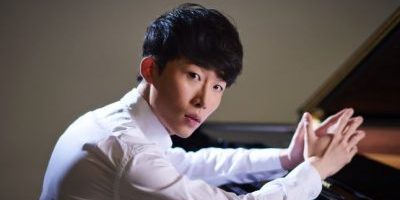 “as cool as a cucumber, and his fingers played with fire” – Classical Source.com

Ji Liu will need little, if any, introduction to the audience of Lamberhurst as he performed here to such tremendous acclaim in 2016 and 2017. The feedback from those concerts was so good, that I decided to ask Ji to return, and he is delighted to do so.

I remember asking him last time why such a phenomenal superstar of the Classical Music world is happy to come to our little church, and he replied that it was because of the audience.
He said that when on a big stage, it is easy to feel detached, but the reception and closeness of the people at Lamberhurst really makes him feel in touch with the music, the performance, and the audience.

For those who might not be acquainted with Ji, he has appeared at major venues and festivals, including, Royal Festival Hall, The Barbican, The Albert Hall and Wigmore Hall, the Liverpool Philharmonic Hall, Carnegie Hall New York, Rachmaninoff Hall Moscow, Salle Garmier Opera de Monte-Carlo, and many, many more.
He has recorded 4 CDs – Piano Reflections, Piano Encores, Pure Chopin, and Fire and Water – all of which I can highly recommend and are constantly played on my music system.
I will make particular mention of Ji’s last disc ‘Fire and Water’ which is a quite remarkable musical achievement drawing on an ancient 5 element theory in Chinese philosophy. It deftly juxtaposes popular repertoire (such as Einaudi’s “Le Onde”) with arrangements by Ji himself, for example, of Rachmaninov’s ‘Spring Water’, and three glorious pieces by Debussy that Ji encored his last concert
in Lamberhurst with.

The programme for this concert is: