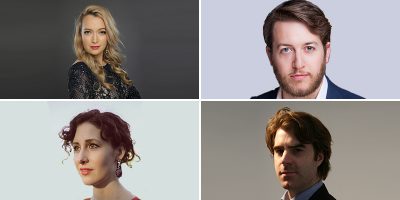 Set in the ruins of the breath-taking 12th Century Bayham Abbey join DEBUT for an unforgettable night at the opera. Conquests of Love features an expertly curated selection of music that celebrates the very best of opera, from Carmen to La bohème, Don Giovanni to The Barber of Seville and The Pearl Fishers to Die Fledermaus. This tale of passion, power and jealousy, is brought to life through an original script with an incredible cast, direct from performances at the Royal Opera House and English National Opera. The story tells of a love between two couples that tests their fidelity and friendship. Hearts are broken, revenge is sought, egos are massaged, and ultimately, choices have to be made.

For the first time DEBUT brings their reputation for presenting thrilling performances in unique venues to the Lamberhurst Music Festival. Featured in Opera Now and Classical Music Magazine as ‘a great introduction to some of the best talent’, DEBUT’s recent highlights include performances at the Royal Albert Hall, Kensington Roof Gardens and the Royal Academy of Art.

As the sun begins to set behind the stunning Old Bayham Abbey join us for a memorable night of music, drama and entertainment.

I think of this new opera a little like how the film ‘Mama Mia’ built a story around the tunes of Abba. This is a cleverly crafted story interspersed with some of the best opera tunes imaginable, and is one for opera buffs, and those new to opera alike.

The Barber of Seville and La Cenerentola by Rossini  | Così fan tutte, The Marriage of Figaro and Don Giovanni by Mozart  | La bohème and Edgar by Puccini  | Rigoletto by Verdi  | Die Fledermaus by J. Strauss  | Anna Bolena by Donizetti  | Carmen and The Pearl Fishers by Bizet